The Local Flavor of Israeli Jazz

During the past century, Jazz has become a major form of musical expression. Though its origins are Afro-American, it is commonly played today all around the world. From each cross-cultural intersection emerged a new form of Jazz seasoned with a local flavor.

In most countries the local flavor is rather easy to detect, yet in other, such as multi-cultural countries, it might be harder. Israel is one of those countries. In this presentation we will analyze the Israeli style of Jazz and detect its own specific characteristics.

An examination of the Israeli Jazz scene, at its late revival (post 1980), reveals five main characteristics, which interestingly differentiate it from its origins in America:

(b) Asymmetrical and odd meters;

(c) An absence of political statement.

This piece has all the characteristics of this style, as we shall see in our presentation today.

In fact, I strongly believe that Avishai Cohen is arguably the father of Israeli Jazz. He created those sounds, rhythms and harmonies that we will hear later on in the music of all the other musicians of Israeli Jazz.

Avishai Cohen the bass player was born in a small Kibbutz in the north of Israel. He grew up in the United States, before coming back to Israel to study at the Jerusalem Academy of Music, where I currently work. His first solo album came out in 1998, and it is called Adama – which is the Hebrew word for "Land". His career breakthrough came when he joined the sextet of the great Chick Corea, and his first albums were recorded under Chick Corea's label.

Since then, he recorded 15 more albums, both solo and with his trio, and he started his own record label – "Razdaz records". His Recent album released in 2015 is called "From Darkness".

The New York Times described his style in 2006 as:

So what is this "Middle eastern Groove" – that The New York Times is referring to?

Let's try to answer this question in our discussion today.

1. The use of the minor key

Why is that important? There are thousands of standards in the American Jazz repertoire, and it is reasonable to say, that in the American Jazz repertoire, the MAJOR key plays a very significant role. However, in Israeli Jazz, we get the opposite! Most of Israeli jazz songs, and all the pieces we are listening to in this presentation today, are in a MINOR KEY. That is an important characteristic, I believe, and what is the reason for this importance of the minor key?

Avishai Cohen, his most famous piece – "Remembering" from his 2004 album, "At Home"

This piece - "Remembering" is a good example of our second characteristic of Israeli Jazz which is:

2. Simple and "sweet" harmonies, sometimes only triads and not 7th chords!

A little bit about Omer Avital – Omer was born and raised in Israel, in a small town where I live these days – Givataim.

Afterwards, he moved to New York, and played there with some of the great Jazz musicians of the nineties: Joshua Redman, Brad Meldau, Winton Marsalis, and many more. Then, he came back to Israel, and also studied, like Avishai Cohen before him, at the Jerusalem Academy of Music.

He established two bands "Third World Love", and also "Yemen Blues" – a band that combines influences of Yemenite music, funk, and blues. Omer plays oud and double bass all over the world today, with many of the other musicians we are taking about in this post.

What is the meter here??!

That leads us to our 3rd characteristic of Israeli Jazz:

And let's elaborate here a little bit – in the American Jazz Standards repertoire, the common time signature is usually even, and usually four four (4/4) About Take Five – by Paul Desmond – this song is of course the exception

But in the Israeli Jazz of the past thirty years, the most common meters are not 4/4 – four four, but all kinds of Asymmetrical and odd meters – seven eight, nine eight, eleven eight, and more.

5. Instrumental music, with no political statement.

Jazz in America has always had a very strong political and social agenda in it. For example Duke Ellington, Billy Holiday, and Charles Mingus, were always very involved politically and fought racism in many ways, and it was also evident in their music. However, in the Israeli Jazz of the past thirty years, there is no political aspect, and most of the music is instrumental music. What is the reason for that?

I think that this is a common feature of Israeli music in general – it usually avoids dealing with political and social issues.

Summary – let's summarize all the five characteristics of the Israeli Jazz that we have discovered today:

2. Simple and "sweet” harmonies, with sometimes triads not 7th chords;

5. Instrumental music, with no political statement.

You can find more about Israeli Jazz at my YouTube Channel 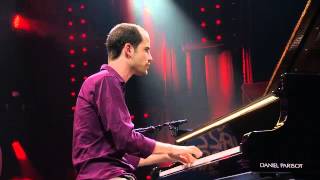